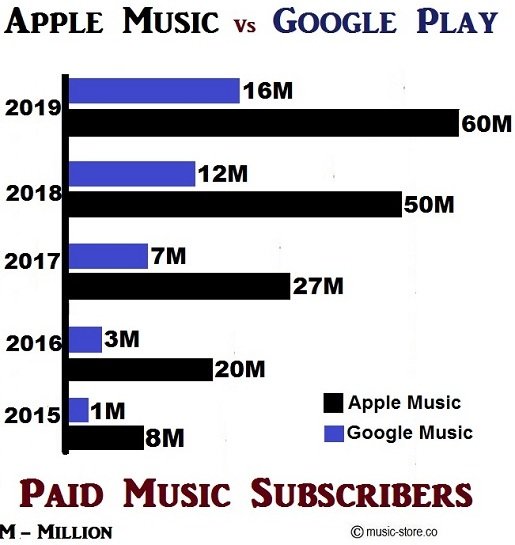 Both services were launched in mid and late 2015, following companies like Pandora and Spotify, who were growing leaps and bounds.

We have decided to look at the services, to see if they stand up to what they offer and how they compare to each other.

On the homepage, you will see a message asking you to personalize the services.

Click on the message to identify your music genre and artist from an endless list of artists.

Google offers paid and free versions of play music with a trial period of 30 to 60 days in case you want to subscribe to the paid version.

Apple Music too has a page representing music genres and artists that you need to choose from while customizing your page.

You need to click once on the genre or artist you love and twice on the one you like and X on the ones you don’t like.

They offer different options to choose from and once you are finished choosing, you are ready to rock and roll.

Both sound qualities are great sometimes you won’t notice the difference. 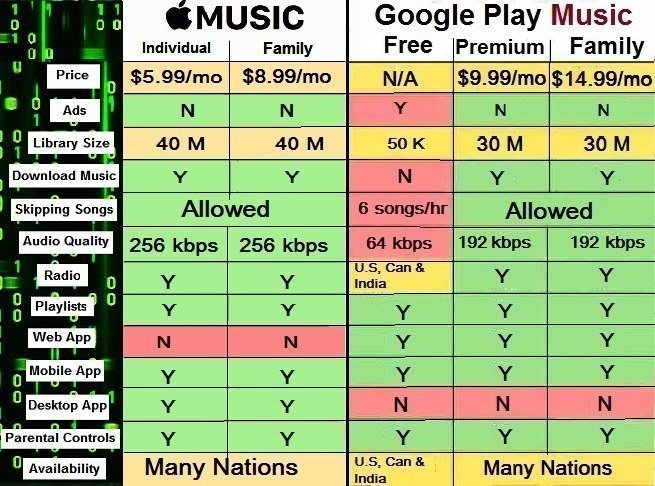 Google Play Music offers a thirty-day trial, after which you have $9.99 per month for the basic plan.

But they don’t have the family or student plans. On the other hand, Apple Music (plans) has three tiers, the Basic, Family and Student plans.

If you are a student and have proved with a valid ID, you need to pay only $4.99 per month.

Apple Music users are set to enjoy family and student plans, as well as the free for all plans.

They can gain access to services like a few ads-supported radio station, the beats 1 radio, viewing connect streams and finally accessing your personal iCloud Music Library.

Google Play Music free tier includes listening to an ad-supported radio station, and skip up to six tracks per hour.

There are quite a few stations available in the free tier including the new releases, top of the charts and stations based on your activity and mood.

Finally, you will get to listen to over 50,000 songs and upload your iTunes library quickly using an extension they provide.

Devices You Can Play On

The two services offer the same number of songs.

They both offer 50 million tracks with a vast selection of music, but different playlists.

Apple Music has an edge over Google Play Music because of it’s curated playlists.

They have Apple Connect, a feature that allows users to receive curated music from the creator they follow.

Apple has its radio station which features special appearances by major artists.

Google Play Music has no features that allow users to discover new music.

In contrast to Google Play Music, Apple is all about discovery.

Both services are filled with recommendations based on the artist that they follow.

Further, the Apple Music Connect feature allows the user to discover new music curated by both their favorite artists and Apple themselves.

Again, the debate on what you choose depends on personal preferences.

When it comes to apps, Apple Music is being criticized for their design of the mobile app.

But the app is not that different from the one on Google Play Music since both services use the same navigational methods though slightly different features.

For instance, Google Play Music app design has guidelines that make it bright and flashy where as Apple Music opts for a more elegant approach.

Again, you decide depending on your preferences.

Before deciding the best music streaming services, you need to check the services yourself and try them.

For instance, if you want access everything that Google offers, including YouTube, then Google Play Music is the best for you.

In contrast, if you wish to discover curated, new music, consider going for Apple Music.

As on June 2020, a Google Play Music subscriber can access both GPM as well as YouTube Music,but not for long.

It has also introduced special features in Google Play Music app that will transfer all the files to YouTube Music, in a single tap. 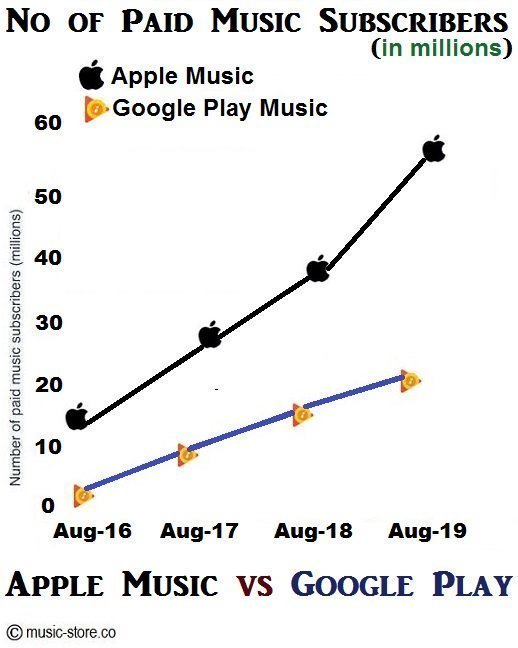 Majority of Apple Music’s paid listeners either come through either iPhones or iTunes.

For the last two years (2018 and 2019), Apple Music’s growth has been painfully slow, at around 20%, the same period where the sale of iPhones dropped,for the first time in it’s history.

Google’s mobile phone, Pixel 2 never had such record breaking sales nor were people interested in YouTube Music’s premium version, when they can get it for free on YouTube’s basic version.

But still Google Music (Google Play + YouTube Music) has seen a steady growth of paid listeners between 2015 and 2019.

Thanks to it’s omnipresent video streaming portal, YouTube, which has more than 2 billion registered users, an unexplored gold mine from Google’s perspective.

Ann Wojcicki, CEO of YouTube must be smirking in her dreams, every time she’s reminded of YouTube’s popularity.