From the creation of 4K content to offering as many services and apps as possible. This is one reason why people were getting sick of cable TV and went looking for other affordable options.

You can find that the cable connection is so expensive per month and the content it provides you with is not enough or satisfying for that matter.

While Apple products are famous for their awesome content, this cannot be said for the Apple TV.

The Roku Express streaming box has more than 6000 channels to offer including the major internet streaming services like Amazon, Netflix, VUDU, Hulu Plus and HBO GO.

Roku Express offers more channels and apps than Apple and more than even the most premium cable TV packages.

The only omission on the Roku Express is it doesn’t support iTunes but there are third-party apps available.

However, most of these apps are in violation of Roku terms and they are removed from the system.

There are iOS apps available for Roku to offer iTunes support but they have limited functionality.

If you are heavily invested in iTunes content, then Apple is the device for you but if not then Roku Express carries the day. 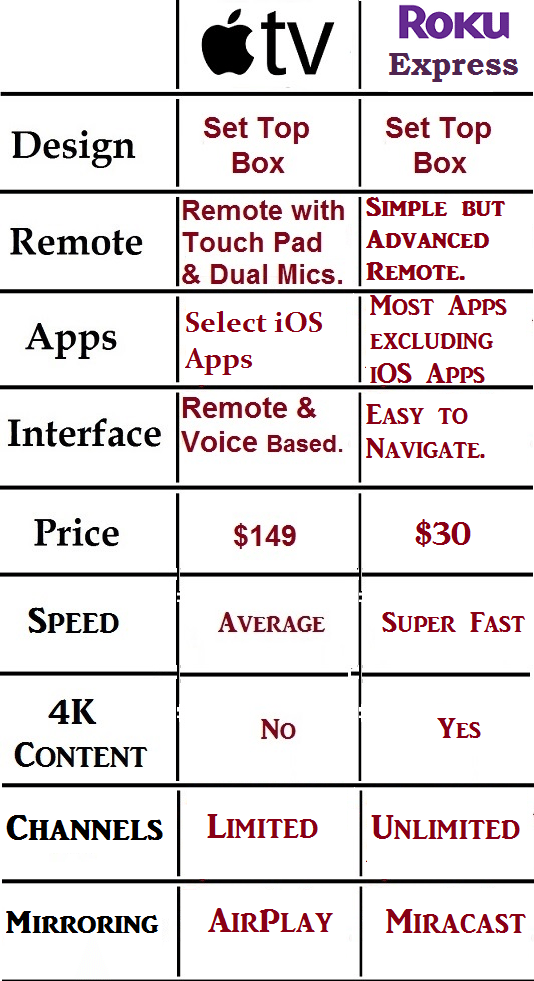 Apple TV connects to the TV with an HDMI cable. The Apple TV box also includes an Ethernet port for direct connections to a router and an optical audio output port.

Apple TV connects to other devices via Wi-Fi, Bluetooth and it also features dual-band Wireless-N capabilities.

Roku Express on the other hand also connects to the TV via an HDMI cable and the same Wi-Fi capabilities as the Apple TV.

However, Roku Express has an added option of a Micro SD slot and a USB port.

This allows you to view movies stored on flash drives and you can also play content from your digital camera’s memory card.

Roku Express, however, doesn’t have an optical audio output or Bluetooth capabilities.

AirPlay mirroring is one of Apple TV’s distinguished features.

It allows the user to display content from their iPad, iPhone or Mac computer on the television using Apple TV.

If you pull any content online with a Mac computer or an iPhone, you can also view it on the TV and this expands the content possibilities of Apple TV.

Roku Express is somehow limited when it comes to mirroring. It has no built-in mirroring but it is possible with Miracast a mirroring standard for Wi-Fi devices.

However, the functionality of this feature differs among different tablets and mobile phones and doesn’t work on Apple devices.

In easier terms, there are elements of Apple’s AirPlay that can be mimicked on the Roku Express but it doesn’t have the complete mirroring capabilities of AppleTV. 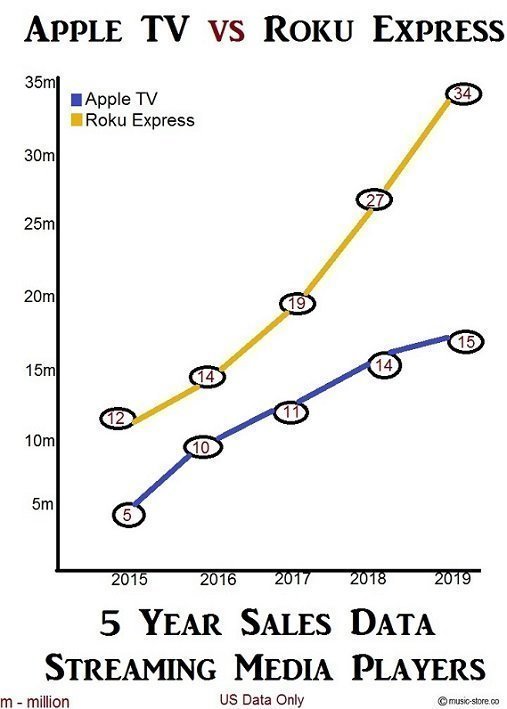 The user interface of any device is what dictates how easily you can navigate. Apple is known to develop some of the best user interfaces but that doesn’t apply to Apple TV.

Apple TV’s main menu is similar to the look and feel of the iPhone’s homescreen. It has a number of static app icons that launch the various streaming services.

This might be awesome on handheld devices but not suitable for the Apple TV. It becomes a bother to navigate through Apple TV’s interface using the remote control.

On Apple TV, there is a way you can arrange the icons and apps you like and also hide some of them but it is a difficult process.

If Apple adds a channel and you don’t like it, you will be stuck with it on the homescreen.

Roku has a better interface with menus flowing from left to right making it more natural and easier to navigate.

The interface gives you full control of the apps that appear on your menu and you are not forced to go through a bunch of apps to get exactly what you want.

Both Apple TV and Roku Express has the standard remote control included in the box.

However, Roku Express has a more advanced and easy to use remote.