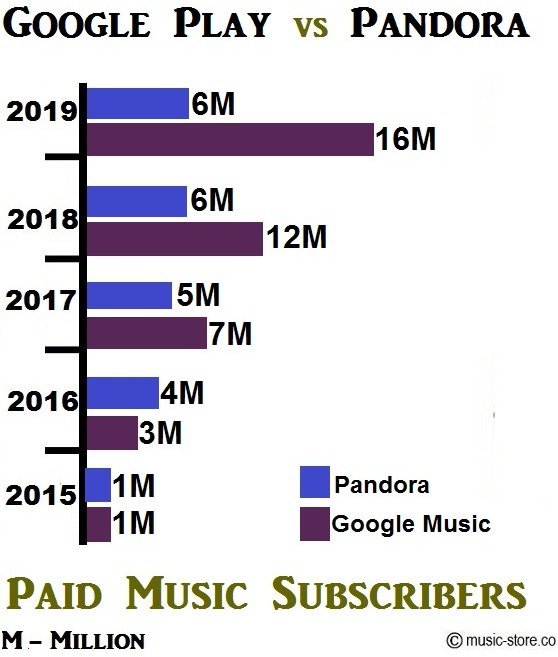 For long, the music industry has been trying hard to figure out how best to leverage the internet, to not only maximize the sales but to give exposure to budding artists.

Napster tried to do that in the 90s, got itself caught in a legal tangle and was forced to shutdown in 2001, after a bitter legal battle with the record labels.

iTunes ruled the 2000s decade, setting exorbitant prices for downloads, keeping a huge percentage of every download to itself, robbing innocent artists their hard earned money.

Spotify which was launched in 2008 in Europe, was barred from entering the US, as lawmakers denied it a license citing trivial reasons.

Launched in November 2005, Pandora was the only portal, that gave some sort of a competition to iTunes hegemony.

Pandora’s internet radio was extremely popular in the US, gaining more than 90 million regular listeners within 2 years.

Pandora had it all, not only did they give you a personalized listening experience but had more than 400 genres of music to choose from.

Everything that had a melody, rhythm, harmony and a voice had it’s own genre.

From Horror movie themes of the 1920s to Jethro Tull’s funky flute grooves of the 70s, Pandora radio had them all.

Google Play Music on the other hand, is like the rich kid who throws frequent late night parties at the expense of his father’s resources.

Using the same algorithm as YouTube, GPM shows song recommendations based on your listening history.

Even though the two offer free streaming services, they differ in several ways. 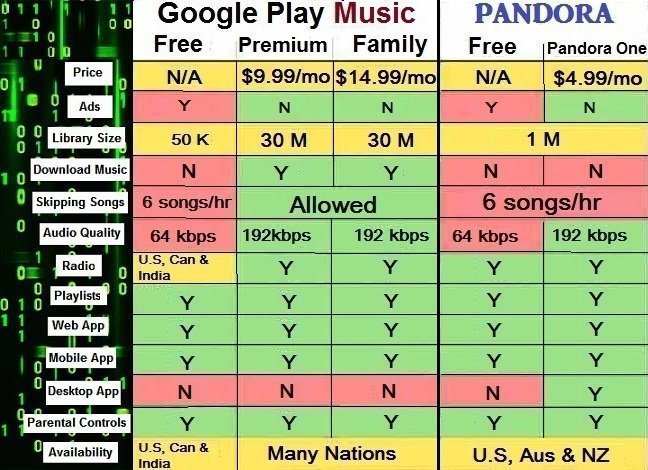 Google Play Music has a repertoire of 40 million songs, since it’s inception users were able to upload 50,000 songs from their hard drive/library to Play Music’s online portal at no extra cost.

Compatibility wise, Google Play Music is available on most mobile and computer devices or basically anything with a web browser.

Pandora internet radio has over 1 million songs from 82,000 artists and singers all over the world, but only available in United States, Australia, and New Zealand giving Google Play an upper hand.

It’s compatible with thousands of devices and easily accessible from a PC or a laptop.

Available on several different mobile platforms like Android, Blackberry, Window s Mobile, and iOS, but you cannot download the app unless you live in the three countries mentioned above.

While both of them offer free subscriptions, some features are accessible at fees that vary.

For Pandora, there is a free tier that supports ad, then there is Pandora Plus a refined, improvised version of Pandora One.

Pandora Plus not only provides unlimited skips and repeats, but takes on streaming giants with it’s very own, newly launched Offline Listening mode.

While the free version provides you with special features that can help you create your very own custom radio station, it does however promote adverts.

However, Google Play has zero advertisements in it’s interface, while playing music.

Pandora Plus ($4.99 a month) gives you the ability to replay tracks, listen to your most played offline stations, has a high-quality audio, and a longer timeout period.

Pandora Premium ($9.99per month) is an upgrade of plus where you get the ability to search, play songs on demand, more offline listening options, fully customizable playlists, and has no timeouts.

Though it’s free, there is a limit as to how many songs you can listen and store for free with your device.

Unless you enjoy using the application, listening to all the music in the world would be boring if the design is dull and unattractive.

However, Pandora comes with extra options that allow users to rate each song; it’s design is spontaneous which makes it easy for users to pick up quickly as it’s simple as well.

Though Pandora’s design is not as bright as that of Google play app, it’s beautiful especially with the recent launch of Pandora Premium.

Google Play Music app allows you to create your playlist where you find the songs you want, add to playlist.

In addition, you can make your playlist public and share it as well with other users.

Pandora auto generates playlists after you have rated (thumbs up) five or more songs on stations you have created.

Every time you thump a song, it’s automatically added to this playlist which plays the only songs you have rated with a thump up.

Though you can share your playlist to any medium you prefer, Non-Pandora Premium users can view your playlists, but the ability to play is only possible if they upgrade.

Unlike Google play, Pandora limits your playlist to only a particular song or artist, and the player doesn’t allow rewind or repeat any songs.

There are more differences, particularly when additional features are concerned.

Their sound qualities differ where the highest quality of Google play is 320 kbps and 192 kbps for Pandora.

Both offer specified duration for a free trial after which users choose their preferred music streaming services.

Users have a tough time deciding on the best, and even if these apps are engaged in an epic battle to dominate, only uniqueness will make one stand out among others. 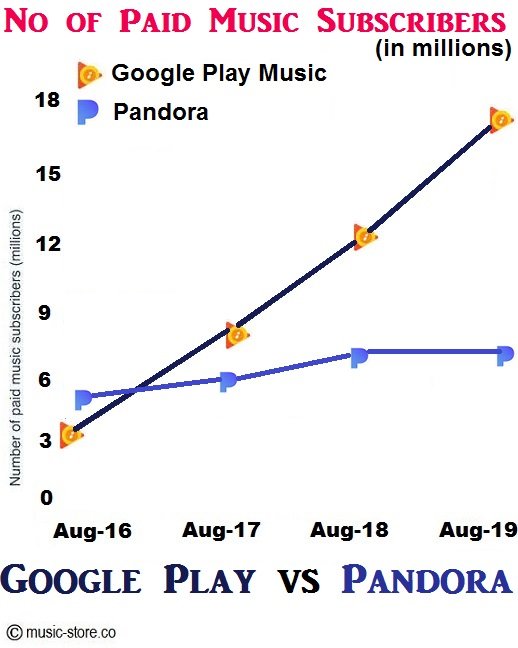 But that is not the case, it has been overtaken by not one but four companies started years after it’s inception.

In 2015, they had 1 million subscribers, after five long years in 2019,they have only 6 million paid listeners.

Whereas Spotify has crossed 100 million paid subscribers in July 2019 and they started their operations in 2006, six years after Pandora’s incorporation.

Google Music is not far behind Spotify (in terms of music streaming apps) and has reached 16 million subscribers in 2019, and they were established in 2011, 11 years after Pandora came into existence.

It’s not that Pandora has not anything to retain it’s dominance in online streaming industry.

In 2015, they acquired Rdio for $75 million, in 2013 they acquired diversified ticketing agency Ticketfly for $450 million but still Pandora was hardly able to cross 6 million paid listeners even after 20 years of it’s existence.

The reason is very simple,the combined net worth of some of it’s competitors (Apple, Google and Amazon) is bigger than the GDP of one third of the world’s economy.