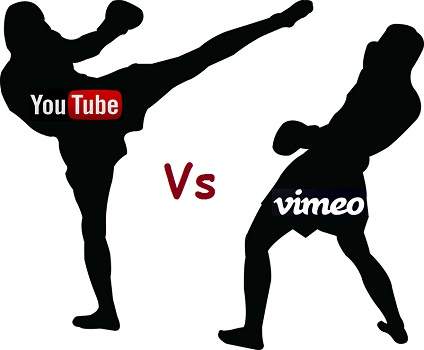 This is one of the similarities they have, but still, they have a lot of significant differences.

Vevo was born when recording companies saw there was copyright infringement when it comes to the music industry and YouTube.

A lot of songs were uploaded to YouTube without the recording company’s permission.

This was when the recording companies came up with Vevo.

One main difference between these two websites is that on YouTube, videos are uploaded by users while on Vevo, only the admins have the right to upload music videos.

This is the main difference between YouTube and Vevo.

On YouTube, you can find all sorts of videos so long as they do not violate the YouTube terms of service and as long as it is not a pornographic video.

This means you can get all sorts of videos including How to videos, educational videos, movie clips, movie previews and any other kind of video.

With YouTube, it doesn’t matter what kind of a video you upload as long as it meets the terms of service and it is not a pornographic video.

The difference with Vevo is that, you can only find music from artists that are under the participating recording label’s contract.

This means you cannot find an instructional video on Vevo or find any other kind of video apart from music and this music has to be from the participating record labels.

Remember Vevo was formed by these companies to avoid copyright infringement to their artists.

Most users who upload videos on YouTube are there looking for views.

This is why you find some of the videos on YouTube are misleading with incorrect thumbnails and titles.

These are aimed at innocent viewers and the users who upload the videos aim to increase the number of views on their channel.

You will find a video with the title of the video you are looking for and also the thumbnail but once you play it, it has the wrong content and this is frustrating. 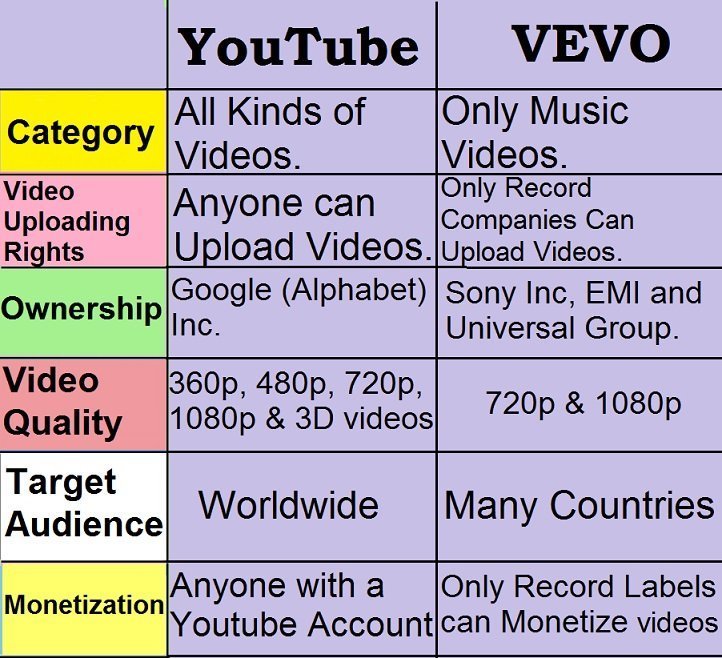 YouTube is primarily run by users. This is one reason you can find all sorts of videos that people can watch.

All of the videos on YouTube are uploaded by the users and there is a wide selection of videos to watch.

You only need to create a basic user account on YouTube for you to upload any video you want. On the other hand, Vevo is strictly run by admins.

Only admins have the ability to upload videos to the site.

At the same time, you cannot take down a video on Vevo because you don’t have the capability to do so and you are not the one who uploaded it in the first place.

Unlike YouTube where if you want to take down a video you uploaded, you can easily do so.

This has its advantages and also disadvantages.

On the positive side, you will get videos of high quality since the admins uploaded the videos from the recording companies, so they upload the best quality videos.

You will not find low quality, grainy or blurry videos on Vevo… like you would find on YouTube.

On the downside, you will get only a limited number of videos that have been uploaded by the admins.

YouTube is available just anywhere in the world apart from the countries which it is restricted.

Most people are not aware of this, but YouTube is not watched in every country in this world, because it is restricted not because they can’t access it.

On the other hand, Vevo is only available in selected countries like the UK, US, Canada, Australia, New Zealand, and Ireland.

You can only watch Vevo in any of these countries.

Once you leave these countries, you can say goodbye to Vevo.

However, Vevo has a YouTube channel where it features music videos.

Today, it is the third most visited websites in the whole world behind Facebook and Google.

Vevo is a collaboration between three major record labels.

These are Sony Music Entertainment, the Universal Music Group and EMI.

They are three of the “big four” major record labels.

The goal behind the creation of Vevo was to reduce copyright infringement and also to attract high-end advertisers on their site.

Despite having all these significant differences, YouTube deserves a lot of credit.

It is one of the biggest open forms of sharing content today.

In January 2012, YouTube said that it was receiving more than four billion views per day.

Today, it has the biggest collection of videos available in the world.