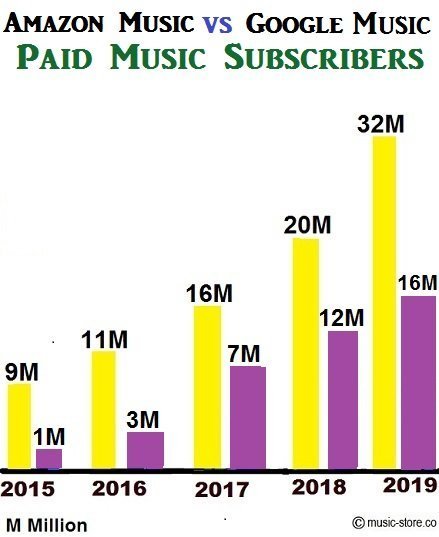 Even the great iTunes, which dominated the music industry in 2010s, is about to go extinct in the next few years.

Such is the cut throat competition in this industry, that companies are pouring millions of dollars, inspite of gaining a single penny as a profit even after a decade.

For example: Spotify, which has been in the streaming business since 2006, with 130 million premium subscribers as of March 2020, is yet to break even, after all these years.

Music Unlimited and Google Play Music are comparatively new comers in the streaming industry, hoping to snatch a big chunk of subscribers from Spotify.

But anyone who is aware of Spotify’s aggressive marketing strategy would tell you, that is no child’s play.

Let us take a took at these two “wanna be” leaders in the streaming industry and find out what sets them apart.

While Amazon Prime is free, all Amazon Music Unlimited subscription costs a certain amount of money.

Good news for the US is, with a prime account, you only need $ a month to subscribe to their Unlimited version.

The standard price goes for $ a month while the family subscription costs $$ monthly despite the lack of a Prime membership.

Amazon has a 30-day free trial for the Music Unlimited which gives you a chance to decide whether to use it or go for an alternative.

To access the 40 million Google Play Music library, you get a three-month free trial, and if you are impressed, it will only cost you $9.99 a month to enjoy playing your favorite tracks. 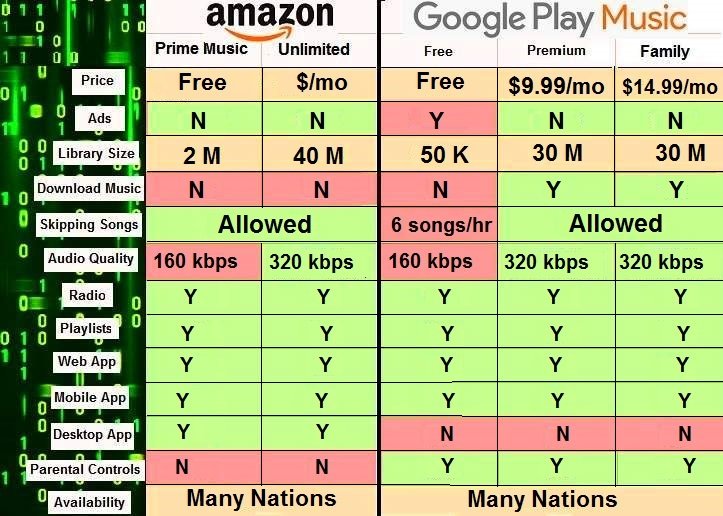 Currently, Google Play Music prides itself with 40 million tracks which are accessible to over 58 countries.

Contrary to the 50 million songs available on Amazon Music Unlimited, the two streaming services are neck-to-neck on the entertaining industry.

When it comes to design and interface, each of the streaming services display a big difference.

Amazon Music Unlimited does not appear as dark as it’s competitors;it features a design similar to the style of Amazon Prime Video service.

Also, it is easy to navigate, Google Play Music, on the other hand, has a colorful design and interface which is also easy to use as it’s accessible within a click or two.

Every day, music lovers are searching for something new to listen. With Amazon Music Unlimited, recommendations are available based on your purchase history and reviews on Amazon.

However, a little more personalization of their content will improve it’s free-to-use counterpart by far.

Google Play Music recommends according to your streaming history, but the difference comes in with the fact that, Google Play allows you to create a playlist automatically using instant mix based on a song.

Similar to the ‘YouTube Mix’, this highly effective music discovery algorithm is way easier than shuffling through the tracks.

Almost all music streaming services have listed an offline listening option, while some offer it for free, others include it at a premium.

Amazon Music Unlimited allows you to download albums and songs you have already added to your library for offline playback.

Google Play users, however, download as many tracks as they want to listen offline but that comes with a bonus.

Also, users can upload up to 50,000 of their favorite songs which are made available in apps on all devices allowing them to join the music streaming club without having to start over.

Recently, Google has boosted the number of songs you can store for free. You can stream these songs on the web from your iOS device or Android, on a Sonos speaker or Chrome cast.

Sadly, there is no native desktop app, which is unfortunate for PCs since Google Play Music matches the music at a higher quality, choosing from multiple audio formats.

However, for Amazon Music Unlimited, the Android app is limited to Echo devices, a select number of home entertainment devices and some recently released automobiles have it inbuilt.

Amazon Echo, Amazon Tap, and Echo Dot are among the cheapest plans; listening on those devices comes with restrictions. Much like many applications available out there, compatibility depends on its make.

As the new kid on the block, Amazon Music Unlimited signed an exclusive to air Garth Brooks records.

The American best-selling solo artist has a different hip factor compared to the popular rhymes from Beyoncé.

Google Play Music may allow you to store and stream your entire music library, but the radio station it sponsors play unlimited music without having to repeat the particular tracks you have saved in your playlist.

An added advantage from the stations is that you will be able to view the entire track list aired and save it.

Unfortunately for Google Play users, the streaming service is not good when you are looking for new releases since it emphasizes stations and recommended music.

On the whole, what Amazon and Google are doing to the music industry is expanding it to new horizons, giving music lovers a chance to be familiar with their favorite artists and their work.

Both are available globally, although Amazon Unlimited Music still has a slight edge over Google Play Music, because of it’s ability to convert a substantial percentage of it’s Prime users to Amazon Music Unlimited subscribers.

And with Google Play Music re-branding itself as YouTube Music,using YouTube’s established platform to gain more subscribers and paid listeners, it still has a long way to go, to catch up with Amazon Music. 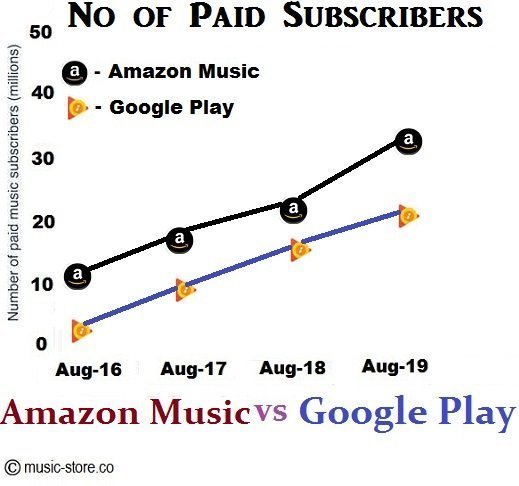 Even though Google Play Music was started in 2011, by the end of 2015, Amazon Music clearly had an edge over Google Music, when it had 9 million paying subscribers compared to Google’s 1 million.

This happened inspite of Google Play Music offering more than 50,000 songs for free listening and before the advent of Amazon Music Unlimited.

And the Amazon customer always ‘felt right’ when they subscribed to Amazon Prime, than when they purchased Google Play Music’s premium package.

Despite this, at the end of 2016, both Amazon Music and Google Music had gained only 2 million subscribers each.

In 2017, fortunes changed for both the streaming giants, as Amazon Music’s tally rose to 16 million paid subscribers, whereas Google Play reached 7 million subscribers.

In 2018, Amazon Music’s total paid subscriber base stood at 20 million, whereas Google Music had 12 million.

Amazon Music’s bleak fortunes totally changed in 2019, where it had a 70% spike in new paid subscribers (32 million), whereas Google Music gained a below par 40% increase in new premium listeners at 16 million.