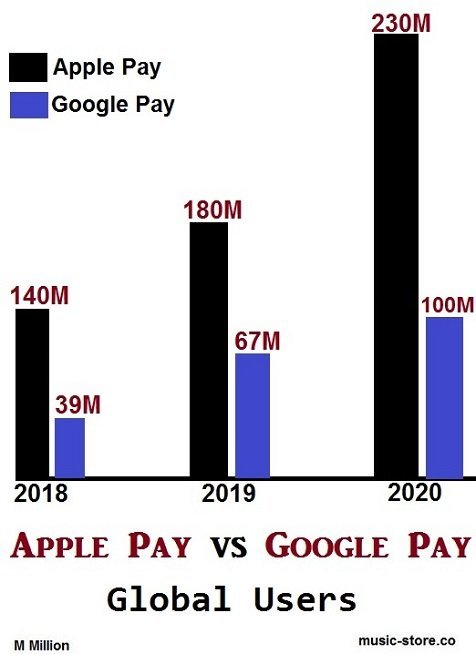 Gone are the days when supply and demand used to be the key ingredients of a successful enterprise, these days corporate behemoths infuse artificial demand in the market, under the pretext of technology.

While most of these ‘induced demands’ eventually gets accepted by the consumers, some are outright denied.

That makes technology, the most critical factor in deciding the fate of any modern day business entity.

When Apple Pay entered the digital wallets vertical in 2014, it do so with the backing of 1000 plus American banks, which played a significant part in it’s phenomenal success, in a very limited time frame.

Apple Pay gained more than 10 million customers within a year of it’s inception, which was equally substantiated by it’s global presence.

On the flip side, Google Pay’s wallet journey was fraught with struggle, rejection and despair.

More than 95% of the banks that approved Apple Pay, rejected Google Pay, in spite of the latter being an android based application.

Which left Google to work with less than 100 banks, when Android Pay was launched in September 2015.

Since it’s inception in 2011, G Pay has not made any profit for it’s parent company Aplhabet Inc, instead has accumulated loses worth millions of dollars, thanks to the highly liberated American banking sector. 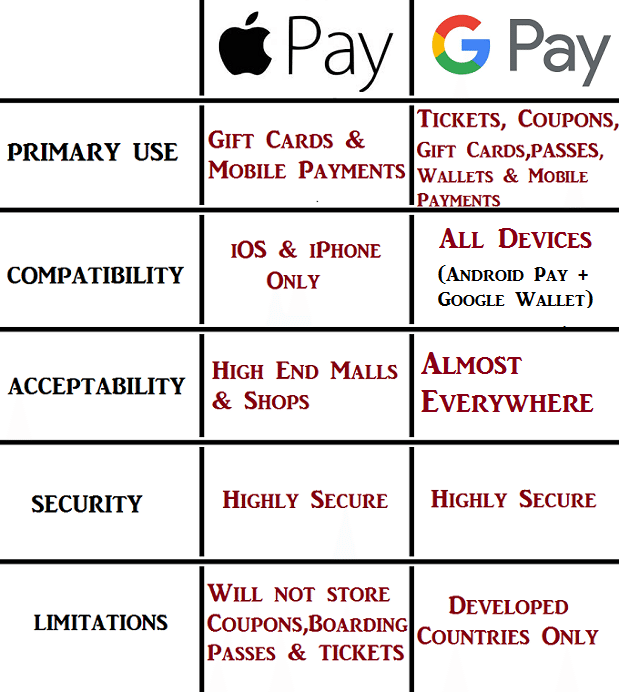 Unlike Samsung Pay neither Google Pay nor Apple Pay use the MST (Magnetic Secure Transmission) technology, which is quite baffling, since Apple Inc spends billions of dollars on iPhone Research & Development, and even after years of research, they were not able invent a tech similar to Samsung’s MST.

While both Google Pay and Apple Pay rely on a combination of NFC (Near Field Communication) technology and RFID (Radio Frequency Identification Technique), majority of the restaurants and gas stations in the US, very much prefer the age old card swiping machines and not the ultra modern contactless payment terminals.

Besides, swiping a credit card has it’s own perks, apart from the usual royalty and reward points, you can also get huge lump-sum loans from the card issuing
banks.

You may still get these points if you use Apple Pay for in-store purchases, as they have tie-ups with thousands of American banks.

Unfortunately the same cannot be said for Google Pay, since they far less partner banks when compared with Apple Pay.

The only place where Google Pay is thriving is India, where G Pay utilizes the UPI (Unified Payments Interface) technique, that transfers funds directly from one bank account to another, just like PopMoney, Zelle or Venmo would do in the USA using the A2A RTP (Account to Account Real Time Payment) protocol.

Apple Pay thrives wherever iPhone is popular, after years of denying them a license, even the great red dragon recently allowed Apple Pay to function in the Mainland China.

As of July 2020, Apple Pay is accepted in more than 500 Chinese banks, major public transport systems across all major cities and countless restaurants, cafes, bookshops, malls and gas stations.

Needless to say, the celebrity status Apple Pay enjoys in the United States, Europe and Australia.

Unlike Apple Pay, Google Pay is not well received by the Chinese banks, only a handful of banks such as Bank of China, Dah Sing Bank, China CITIC Bank International, Bank of East Asia, HKT and Hang Seeng Bank support G Pay, that too in the semi autonomous region of Hong Kong and not in Mainland China.

As we all know, Google Search has been blocked in China for decades now, so are many of Aplhabet’s prime products including Gmail, Google Glass, Play Music and the most admired YouTube.

Unlike Apple, which has found favor in the eyes of the most revered Xi Jinping, because of it’s zero tolerance policy on customer’s privacy and secrecy details, Google has always been viewed by Beijing as an intelligence gathering portal.

But Google’s overwhelming presence in India has more than made-up for it’s absence in Mainland China.

A country of 1.4 billion people, India is by no means a push over but a digital gold mine waiting to be explored.

NFC (Near Field Communication) or not, as long as you have stable net connection, you can send and receive funds in an instant in India, much faster then Zelle or Venmo, with hardly any processing charges.

The same banks that destroyed G Pay in US and China, worked for it in South East Asia, thanks to India’s centralized banking system.

Another factor that worked in G Pay’s favor, is the lack of ATM machines.

With a population of more than 1400 million citizens, India has less than
238,000 ATMs and most of them are located in metros, tier 1 and tier 2 cities.

Liquid cash is indeed a very precious commodity in rural India, where banter system still exists because of the shortage for paper money.

Before the arrival of G Pay, there were not many mobile wallets in India apart from PayTM and Phonepe, neither of them were popular, because of their complex interface, rigid verification procedure, high transaction fees and language differences.

When Google Pay entered the Indian markets in 2018, it had around 39 million global users, fast forward to July 2020, it has more than 100 million customers and yes, most of them are from India.

To be honest, G Pay will never become a profit making entity in the US because of hostile banking sector, saturated ATMs, cut throat competition and of course, plastic preference of American shop owners and shoppers alike.

Apple Pay which was released a few years ahead of Google Pay, has seen a formidable growth, in spite of working on a complicated iOS operating system.

The only advantage Google Pay has over Apple Pay is, it is compatible with billions of devices running on Android OS, when compared with a few hundred million Apple devices.

This means, Google Pay has the chance to grow and reach a broader market as compared to Apple Pay.

Remember Google Pay is a combination of the old Android Pay and Google Wallet.

This means it is not an entirely new app, but a new platform, which already had a few million loyal users.

Existing users only have to update their Google Wallet app on Play Store and get the new Google Pay with combined functions.

• Google Pay is the answer to Apple Pay Cash.

– With this, Google says that most users across the globe will be able to send and receive money using Google Pay’s P2P (Person to Person fund transfer) process, just like Apple Pay users using Apple Pay Cash.

Apple has time and again made clear, it will never compromise with it’s users privacy or security data, be it the iPhone, iWatch or any other Apple gadget, no matter what the circumstance may be.

Even the mighty FBI had to withdraw it’s encryption dispute with Apple in 2016, because FBI knew, Apple Inc would rather burn it’s empire down rather than to budge to the government agency’s ultimatum.

Apple applies the same principle to it’s mobile wallet, where security is given priority over the duration of a transaction.

While both G Pay and Apple Pay use the tokenization procedure, Apple Pay needs double authorization before making any transaction, which means, even if your phone is unlocked, you need to authorize it again using a Touch ID, Face ID or PIN number, which is another reason for it’s elongated transaction duration.

Google Pay on the other hand, does not emphasize much on the double authorization process and expedites the transaction process with a simple unlock of the smartphone.

Another reason behind G Pay’s shorter transaction duration is it’s android based operating system, which is the default platform for most American payment gateway companies and banks.

One could argue that removing the tokenization mechanism would greatly reduce the transaction time of a wallet transaction.

In reality, removing the tokenization design would not only reveal your card details to hackers, but would expose your family members, location, bank balance and assets to dangerous criminals, who would auction it on the deep web to the highest bidder.

Tokenization is considered as the gold standard of any digital transaction, as it ciphers or encrypts your card or bank details by creating virtual bank accounts with random data, making it impossible for hackers to decode your personal payment details.

Even though Apple Pay has more than 230 million global users, with most of them located in the USA, a significant proportion of American population prefer to use Apple Pay, simply because their bank is partnered with them and not because of user friendliness.

Besides, nobody can beat Samsung Pay when it comes to user friendliness, because of it’s MST (Magnetic Secure Transmission) mechanics.

Google Pay, on the hand flourishes in those countries that neither depend on NFC or MST techniques.

In fact G Pay is more popular in those countries that heavily rely on P2P (Peer to Peer) transactions, such as India, Philippines, Thailand and Vietnam.

For example, in India, as of June 2020, more than 30% of the mPOS (mobile Point of Sale) transactions were made through Google Pay.

And by the end of 2022, it is predicted than more than 60% of mobile transactions will be made through G Pay.