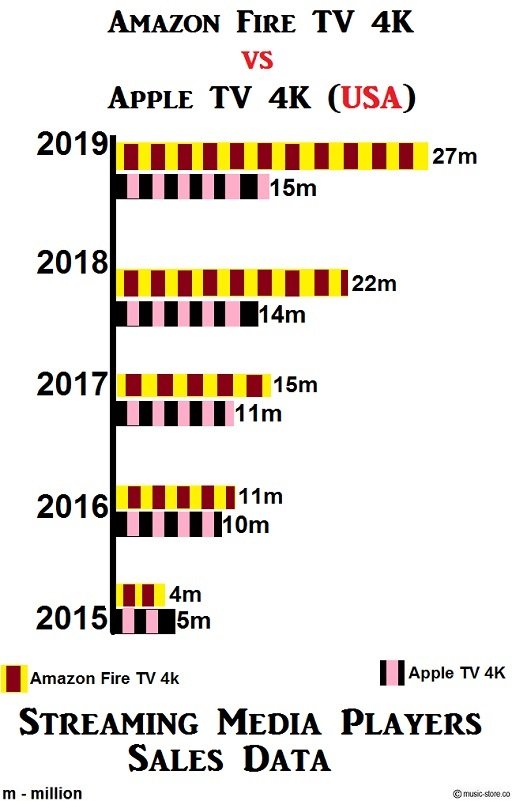 The media streaming business is hotter now more than ever.

Different companies are offering streaming devices very often with the latest entry in the market being the Apple TV 4K.

They might be offering similar services and most of the time delivering the same content,but they vary in different things.

Amazon is also another company in the media streaming business and it has also unveiled its Amazon Fire TV 4K.

The question most people are asking is what the differences between the two and which one should they buy are?

To answer this question, let’s take a closer look at the two and see how they differ.

One of the visible difference between the two is the design.Amazon has redesigned the Amazon Fire TV 4K to a newer version.

The older one had a boxy style and it had to stay on top of the TV stand or on top of something due to the size and the design.

The new model now can hang behind the TV out of sight.

The Apple TV 4K is more familiar and it has a boxy design sitting below the TV.

The box plugs into the HDMI cable of the TV using an HDMI cable that is bought separately.

The downside to the sleek design of the Amazon Fire TV 4K is discussed further in this article. 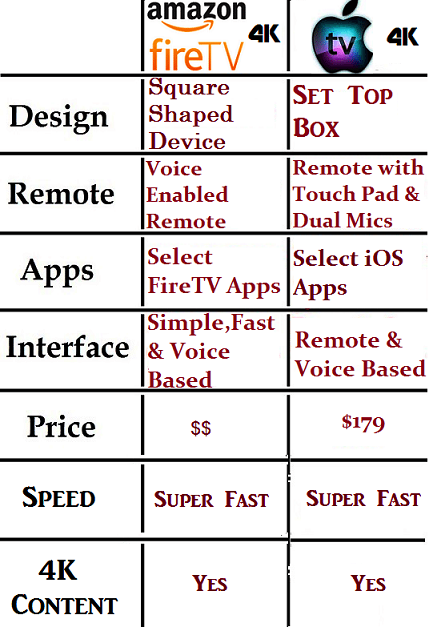 Both of these devices support 4K content either from their movie stores like Amazon Prime Video or Netflix.

However, before we dig dip in this, you have to understand that your TV has to support HDR and 4K content.

Otherwise, you will be spending to buy something that you will never enjoy.

With this said and done, not all HDR content is equal.

The Amazon Fire TV 4K, on the other hand,supports HDR 10 only.

Compatibility is another issue in terms of HDR support with the majority of the HDR TVs supporting HDR 10 only which gives Amazon better chances.

Dolby Vision, on the other hand, is better than the normal HDR 10 in that it can provide brighter and color-rich pictures if your TV can support it. 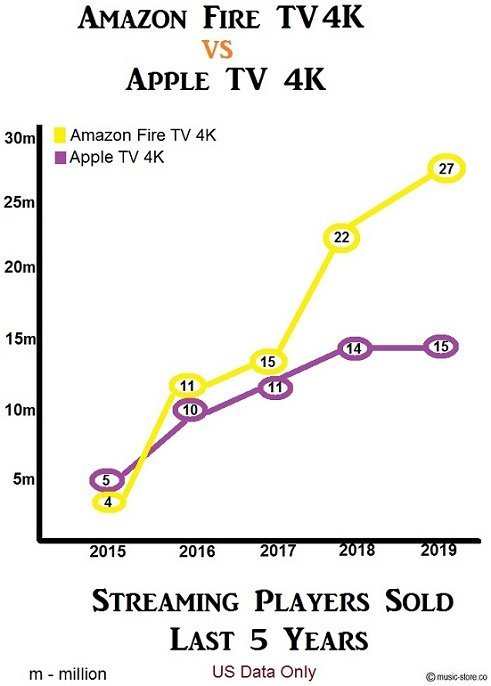 Otherwise, if the device is purely for streaming purposes, the storage will not be so significant.

Apple TV 4K has an edge when it comes to storage space.

You can get either the 32GB or 64GB box as compared to the Amazon Fire TV 4K which has 8GB only.

This is an issue for the people who want to download and store content as well as install apps and games where they are supported.

This is the most significant difference between the two boxes.

This is a big difference compared to the mere ££ that the Amazon Fire TV is going to cost you.

The important thing to note here is that the 4K HDR movies on iTunes are cheaper as compared to the same on Amazon and the selection is also bigger.

iTunes will also upgrade your older movies to 4K for free when they are available.

Another difference between these is the hardware supported by each.

The devices can efficiently use your Wi-Fi connection.

But sometimes this is not powerful enough to stream 4K content.

With the Apple TV 4K, it has a Gigabit Ethernet support capability meaning you just plug in the cable and start streaming.

But you can buy an Ethernet adapter that is separate from the box.

Before making up your mind ad buying any of these devices, you can try both and return the one that doesn’t fit you.

If you are looking for a cheaper option with a range of features and specs, then the Amazon Fire TV is the way to go.

If you are looking to stream your content using an Ethernet connection and a box that supports more HDR standards, then the Apple TV is the way.

It is, however, hard to justify the extra cost of the Apple TV box over the Amazon Fire TV unless you are living exclusively in Apple’s world.