First there was barter system, then came the coins, then paper, followed by plastic, succeeded by E payments and now we have contactless payments, mobile wallets and not very far away is human microchipping.

While the 2000s was all about online payments from a desktop computer, the 2010s saw the rise of mobile payment service providers, which is destined to rule the cyberspace for the next 50 years.

Amazon Pay, Google Wallet, Apple Pay and Samsung Pay were all launched within two years of each other, as they tried to entice customers with cashback offers, prizes, lucrative deals and jaw dropping discounts.

After all these years, even in 2020, mobile payments business is still a billion dollar industry with vast untapped markets.

In fact it is the developing countries that is fueling this industry and not the so called ‘first world’ countries.

Which is why Google Pay and Amazon Pay are the lifeline of Asian economies such as India, Singapore, Taiwan, Hong Kong and Japan, whereas it is just a payment option in US, UK and Canada.

When Google Wallet was launched in 2011, it was nothing more than a mobile version of Paypal, where you load money from your credit, debit card or bank account to your digital wallet’s balance (for a commission) and use it for any online purchase.

The only difference is, any money loaded on to a Google Wallet can also be used for offline shopping at credit card terminals which accept contactless payments.

All you have to do is just keep your card close to the credit card swiping machine or tap it, voila! your transaction has been completed.

Google Wallet/Pay uses the Near Field Communication technology or Radio Frequency technique to connect with the card terminal to complete your
transaction.

While Apple Wallet does a similar thing, it never actually communicates with the swiping terminal, as it is always done by Apple Pay, Apple’s mPOS (mobile point of sale).

The beauty of Google Wallet is, it handles everything from storing cards, to communicating with the EMV machines and finally, making the actual transaction. 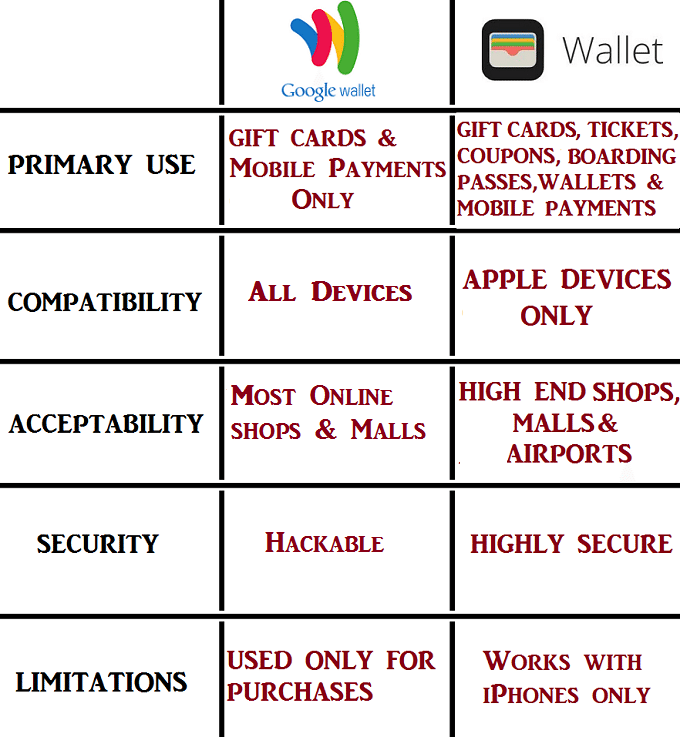 Another significant difference here is that, Google Wallet is compatible with both Android phones and the Apple devices as well.

This means if you have an iPhone, you can use both the Apple Wallet and Google Wallet on your phone.

On the other hand, if you have an Android smartphone, it is impossible to use both the services since Apple Wallet is strictly limited to being used on Apple devices.

Both Apple Pay and Google wallet use Near Field Communication NFC technology, which is more of smart chips and waving rather than magnetic strips and swiping.

Google Wallet has done it’s best to make sure your purse is digitized, but Apple is doing a much better job.

G Pay initially used a secure element for their transactions, but they later found themselves locked out by carriers like Verizon.

Google then stopped using the secure element in 2014,but instead, they started using host card emulation.

Google Wallet uses a PIN to authorize transactions and the app can be remotely disabled from Google Wallet’s website.

Apple Pay, on the other hand, incorporates a secure hardware element, but instead of a PIN code to authorize transactions, Apple uses the Touch ID which reads your fingerprint to approve transactions.

For enhanced security, Apple does not store any of your transaction information and it doesn’t track your purchases the merchant also doesn’t see or have access to any of your financial information.

If by chance you lose your phone, all Apple Pay transactions can be disabled using the Find My iPhone app without canceling the credit cards on your phone.

This makes Apple seem superior when it comes to security and convenience as well.

You don’t have to open your app, enter a pin or navigate to a coupon or card to make a transaction.

iPhone users don’t have to wake the phone’s display,but they just hold the phone near a contactless reader.

Apart from being convenient, it is easier to commit fraud if you know someone’s secure PIN than when they use their fingerprint to authorize transactions.

Google is trying so hard to replicate the real wallet in the virtual world.

It is doing this so much that using Google Wallet; it tracks all your transactions, saves order details, making it seem like you stuffed your receipt into the wallet.

The data collected is used by Google to serve ads that matter to you and this feeds directly into Google’s business model.

Apple doesn’t even store your card details on your device or their servers.

The only thing Apple does is transmitting your card to the bank and authenticating it then receives and stores the DAN that the bank will send back.

Apple is a payment medium and not a payment intermediary and it sticks to that.

However, if someone gets access to your Apple Pay phone and somehow your fingerprint, you will have to take that up with the bank and not Apple.

The consumer becomes the ultimate winner with these two mobile payment methods, because they just have to choose the most convenient for them.

The two have their strengths with Google Wallet having its strength lie in its support for loyalty cards.

And the ability to send and receive money just like PayPal does and also its ability to work with any bank or credit card.

Apple Wallet’s strength lies in its ease of setup and use and security too.

The app’s design is simple, intuitive with the TouchID giving the Wallet, an extra layer of security.