Despite the fact that the mobile wallets’ business is a billion dollar industry, not many companies are making a profit off of it.

Apple Pay and Google Pay which have been in the business for a long time, have not made a single penny of profit in spite of subsidising swipe charges to merchants apart from offering huge discounts and cashbacks to customers.

One cannot help but compare Apple, Google and Amazon’s digital wallets with their respective music streaming services, which obviously are in deep waters just like their digital currency counterparts.

While this may sound a bit cynical, it does not reveal the whole picture, which is, Apple has more than 200 million wallet users across the globe or that Amazon Pay and Google Pay make up to 60% of digital transactions in South East Asian economies such as India and Singapore.

Nor is it a big deal for these corporate behemoths to entice customers into using their digital wallets, as long as they are in the same portal.

How many times have you seen Amazon app offering steep discounts or cashbacks, if you purchase a product through Amazon Pay rather than through a third party payment gateway.

Google Pay and Apple Pay adopt the same strategy, but the big question is, would the same customer use Amazon Pay or Google Pay on a third party platform?

Assuming they do, which one would they prefer among the two G Pay or Amazon Pay?

Fortunately, there is an obvious answer to this, Google Pay is more likely to be used on a third party portal, simply because it eradicates the entire login process and replaces them with a fingerprint, which is not only more secure than a password but also expedites a transaction’s processing time.

While Amazon Pay may not have this advantage, it does have the numbers on it’s side, with more than 300 million loyal customers across the globe, they are least bothered about frictions or tractions in a transaction.

Let’s take a look at some of the differences that make these two mobile payment systems what they are: 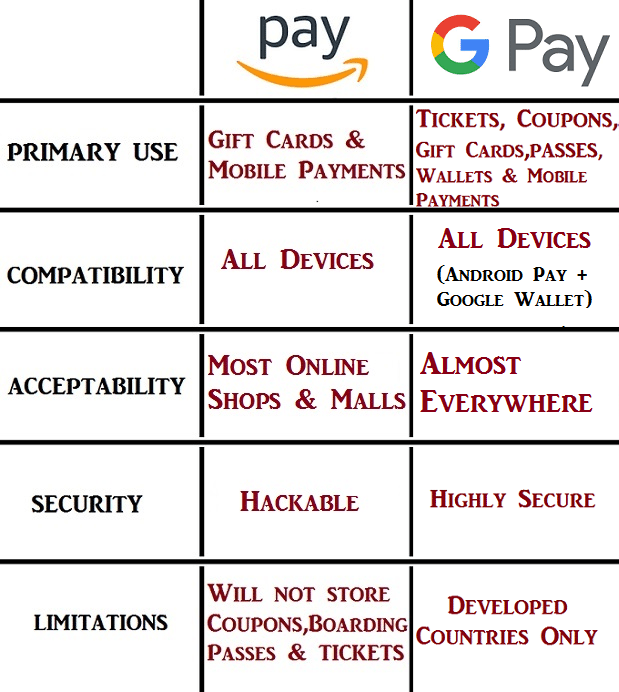 Contrary to the misconception spreading across the cyberspace, you can use Google Pay on an iPhone or iPad, provided you are using an iOS operating system that supports it, preferably version 7 or higher.

On the other hand, Amazon Pay does not have any such compatibility issues, since it is NOT a stand alone app but just a sub-menu item on the Amazon portal.

Besides, you don’t have to waste your precious storage space, which you would, if you download Google Pay from the Play Store or App Store.

But wait, what about the offline transactions or contactless payments?

Unfortunately, this technology is not available in Amazon Pay nor it is in any hurry to develop one.It does have Amazon Pay Places, but it works with very few American restaurants and yes, you still have to use the Amazon app to place an order.

Google Pay, on the other hand has already implemented this feature in many first world countries including US, UK and Australia.

All you have to do is…

Scroll down and tap on the Payments tab, select + (add) Payment Method, capture a clear picture of your add and select Done.You can also add the specifics manually.

If your loyalty/gift card issuing merchant’s name is displayed, tap on it and enter the card details as per the instructions given.

4, You can save passes or tickets, only if your retailer has a tie up with Google Pay.

If they do, you will see an option G Pay Save to Google Pay displayed
in their mobile app or on the website.

If you ever happen to stumble into the deep web, you would be surprised to see the volume of hacked high profile Amazon accounts, on sale.

On the contrary, you won’t be seeing many noteworthy Gmail accounts these days, simply because, Google accounts have become hacker proof, ever since it enabled two step verification, more recently, fingerprint unlocking technology.

When it comes to the actual transaction, Google Pay scrambles your card details, at every step of the transaction.

Even better is the fact, that Google never stores your card details on the same server as the G Pay app, but in a far more secure, hidden location.

So, even if the smartest hacker in the planet, hacks into your G Pay account during a transaction, Mr.smarty pants will have his hands full of meaningless data, rather than a decrypted information file.

You can process a G Pay mobile transaction by just inputting your fingerprint in the slot, which not only saves you time but spares your mind from transaction related anxiety and more importantly recollecting those unforgiving passwords.

However, Google does store a copy of all your transactions in the ‘See all payment activity’ section, which millennials are not comfortable with.

Amazon Pay on the other hand, deletes the transaction history, if it is done on a third party app or website, but all the transaction related specifics are still available in the Your Transaction section of the Amazon Pay (Amazon) app.

Besides, you don’t have to enter your card details whenever you choose Amazon Pay on a third party portal nor will the same be saved on that shopping portal.

But still, you should be smart enough to recollect your Amazon password, if you choose to transact through them, good luck with that.

Based on the ease of conducting a transaction, with a simple yet highly secure fingerprint unlocking system , Google Pay is once again the winner.

In spite of being the biggest search engine in the world, Google, recently lost it’s highly coveted, top ranked product search engine ranking to Amazon, which more or less speaks volumes about the future of these two digital behemoths.

As of June 2020, there are 3.5 billion smartphone users in the world, while a billion of these are iPhones, the other 2.5 billion are Android based mobiles.

But only a third (approx 800 million) of these users have actually purchased something on Google Play and none of them have ever used Google Pay, which has been in the market since 2011.

In other words, Google never leveraged it’s Play Store to get more G Pay users, whereas Amazon Pay entices each and every one of it’s customer, to use the Amazon Pay gateway, at every step of purchasing a product, including it’s Prime users.

The working class is extremely impressed with Amazon’s marketing strategies, which has seen it grow at a phenomenal rate in the last few years.

While both Amazon Pay and G Pay have around 90 million users across the globe, a majority of them are from the developing countries, rather than from the first world countries.

It is predicted that by the end of 2021, around 60% of all digital transactions in countries like India and Singapore will be through Google Pay and Amazon Pay.

While this is not too big a surprise, these two digital wallets are expected to make inroads in to the heartlands of America, by the end of this decade.

In spite of it’s technical short comings, Amazon has executed it’s marketing game plan to absolute perfection, which has not only increased Amazon Pay’s user base, but has also become an integral part of many developing economies.

Without any apprehensions, Amazon Pay is the clear winner when it comes to adding new users.

Any good marketing guru will tell you, that if there is no demand for a product, it is better to shutdown or shift places, instead of watching your business crumble, systematically.

That’s exactly what these digital wallets did, mobile vaults such as Google Pay and Amazon Pay shifted their focus to Asia and rural Australia, where there is a huge demand for ATM machines and credit card terminals.

While Amazon Pay’s offline business has no scope in the Americas, Google Pay has a very good chance of not only surviving but thriving in the least competitive contactless mobile payments vertical, where it’s only competitors are Apple Pay and Samsung Pay.

And if you are wondering, why is it so difficult for multi billion dollar companies such as Amazon, Google, Apple and Samsung to survive in the mobile payments industry?

The answer is simple, America doesn’t need any mobile wallets.

With more than 470,000 ATM machines in the country, the highest in the world, why would any rationale being switch over to a mobile wallet, unless he or she lives at the top of the 100-Mile Wilderness, Maine.

Besides, using a credit or debit card would earn you the much coveted loyalty points from the card issuing bank, which can get you humongous loans, with the least of documentations, at the shortest possible time frame.

Can a mobile wallet do that? heck no!

Which is why Google and Apple are issuing physical credit cards, defeating the very purpose of the term ‘mobile wallet’.

While everybody knows about Apple Pay’s titanium credit card in partnership with Goldman Sachs and Master Card, released in August 2019.

Not many people are aware that in June 2020 Google Pay had launched a similar card in India, through a partnership with the well known private entity, ICICI Bank.

Unfortunately in India, you cannot use Google Pay for contacless payments nor could you use them to pay credit card bills, much worse is the fact, that you cannot even add a credit card as one of your Payment options, it’s just the good old bank accounts.

Even though G Pay has left no stone unturned, it is only available in 28 countries, that too with selective banks.

Bluntly said, Google Pay is a fiasco in every country that is dominated by private banks and a triumph in those countries where the banking sector is strictly regulated by the government agencies.

Whereas, Amazon Pay can send money no matter where you are in the world.

It works more or less like PayPal only that it has more users since it is also one of the biggest e-commerce websites in the world.

• Amazon Pay makes it easier to make purchases on amazon.com and will attempt a delivery, wherever you may be stationed at.With Google Pay, you have to be in a developed country, where it is supported.

• Amazon Pay has a more significant market share when compared to Google Pay. As of June 2020, Amazon owns more than 50% of the entire American E commerce market share and 1 in 3 American is an Amazon Prime subscriber.

While Amazon Pay is available only in 20 countries for UPI (Unified Payments Interface) or A2A RTP (Account to Account Real Time Payment) transactions.

Just about anyone can access Amazon Pay, through Amazon.com, from anywhere in the world, as it is not an app, but just an interface on the Amazon website or application.

And that proves, Amazon Pay is far more easier to access than Google Pay.