Media streaming has lately become more of 4K streaming and companies are doing their best to keep up.

Apple was the media streaming company that was left behind in the 4K feature but now it has introduced the new Apple TV 4K.

It has just joined it’s competitors like Chromecast in the civilized world of 4K Ultra-HD.

According to Apple, this is something that should have happened way back in 2015 when they announced their new and improved Apple TV.

The Apple TV and Apple TV 4K are similar but definitely not the same.

They deliver almost the same content only that the Apple TV didn’t have some capabilities. If you take a look at both of these boxes, they look similar.

If you, however, look closely, you will note that the Apple TV 4K has a more contoured base to accommodate the cooling system better.

Another difference between the two is the slightly revised “Siri” remote which has a raised white ring around the “Menu” button.

This is probably one of the most significant differences between these two boxes.

It is the biggest selling point of the Apple TV $K,but your TV set has to support 4K HDR capabilities.

The 4K technology will only be useful if you own a TV that can support HDR and 4K capabilities.

4K also known as Ultra-HD or by the unique resolution 3840 x 2160 and it simply means that the Apple TV 4K can give you an output of around four times more than the standard HD Apple TV box.

HDR also known as High Dynamic Range is a technology that allows the box to display better, much brighter and more colorful pictures.

The capability of the Apple TV 4K is, of course, the results of upgrades in the specs. 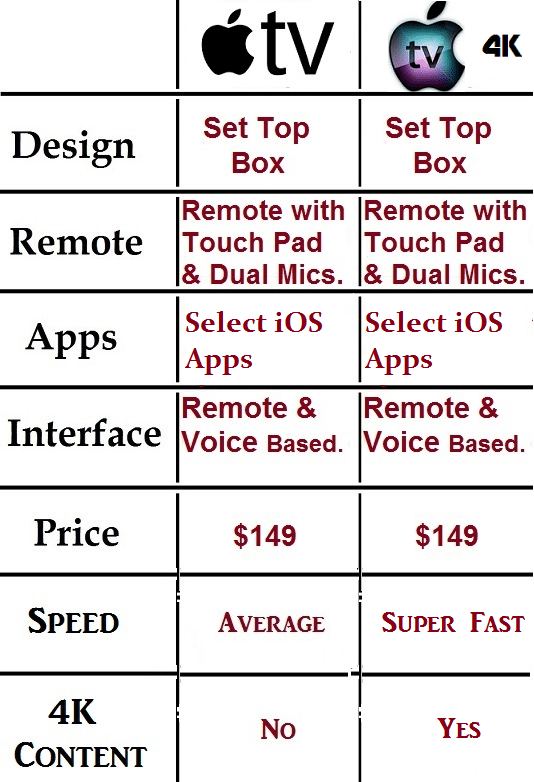 A lot has been changed in the specs between the two devices and the results are what powered the capabilities the Apple TV 4K has that the other Apple TV doesn’t have.

The Apple TV has a 2GB RAM as compared to the 3GB RAM in the new Apple TV 4K.

The speed of these two boxes is determined by the processor speed and RAM.

Apple TV model has a dual-core Apple A8 processor while the Apple TV 4K has a faster Apple A10X three core Fusion processor.

As seen from above, the new Apple TV 4K is faster and also has the hardware that can well support the 4K (2160) as well as the advanced HDR video (Dolby Vision and HDR 10) which are the biggest and best-selling points of the Apple TV 4K.

Apple TV is limited to support the standard 1080p video.

Media streaming is more of streaming as compared to downloading and storing content.

However, Apple boxes have apps and games that can be installed and this means storage space is also a significant difference. It seems like this is also affecting the price of both the boxes.

Apple TV is limited to 32GB storage while the new Apple TV 4K is available in both the 32GB model and also the 64GB model.

The price of the two, however, is a bit different.

If you want the box purely for streaming purposes, then the storage capacity of the box will not be significant.

Taking a better look at the back of each box, the significant differences become apparent.

They both have aninbuilt power supply and an IR receiver for the remote,but they are different.

Apple TV has an HDMI port and a USB-C port for service and supports only. The box also has 802.11ac Wi-Fi with Bluetooth 4.0 support and MIMO capability.

The Apple TV 4K lost the USB port entirely,but in its place, it has a more advanced and capable HDMI 2.0a port and a much faster Gigabit Ethernet port.

It also has better wireless capability with dual-band 802.11ac Wi-Fi with Bluetooth 5.0 and MIMO capability.

If you don’t have a TV that can support 4K, don’t even think of buying the Apple TV 4K because the capabilities will not be useful to you.

Just get the Apple TV until you can upgrade the TV. If you are one of those people who want the best pictures and audio output and you have a television set that can support 4K, then the Apple TV 4K is for you.

This also applies to those people who plan on playing games on the streaming box.