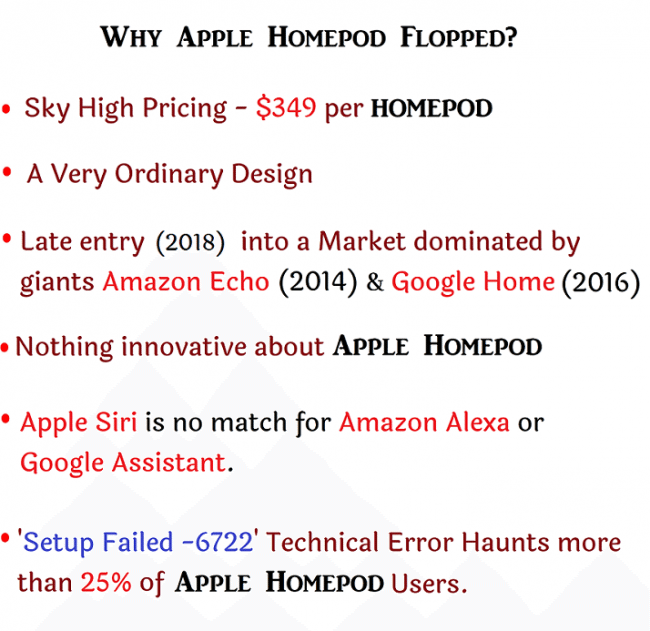 When Apple announced the release of the HomePod smart speaker, for the first time in 2011 and failed, this was the missed opportunity.

Most people, however, remember the December 2017 release date as the missed opportunity.

After its release in January 2018, the HomePod entered into a market already dominated by Amazon with the Echo and Google with Google Home.

Since then, Apple has been airing the HomePod’s superior sound quality,but so far, it hasn’t enticed many customers to part with $349.

Apple had lowered sales forecasts and cut some orders with Inventec Corp by late March the company being one of the HomePod’s manufacturers for Apple.

The Homepod looked like it might become a hit with strong pre orders and the device grabbed about a third of the US smart speaker unit sales in the last week of January. 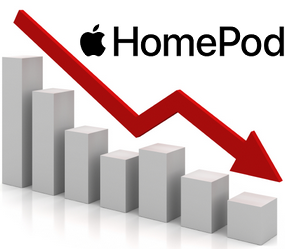 However, by the time the Homepod hit the stores, their sales were tanking according to data provided by Slice Intelligence.

Even when people were able to hear the Homepod playing, it still did not give Apple a spike.

Google Home has also not been left behind with its dominance closer to Amazon leaving the Homepod behind.

Google Home released in October 2016 found Amazon echo with a market share of 88% and it entered the market with an 8.7% share.

People didn’t have the space to embrace the Homepod since Google and Amazon were already waging an intense war on two fronts in the smart speaker space.

Also, Apple did not enter the market with a heavy punch or even prepared for battle like its competitors.

One war front that Google and Amazon were already fighting in is the hardware devices.

Currently, Amazon has six versions of the Echo. The original Echo which was followed by Echo Dot, Show, Look, Plus and Spot.

Amazon Tap has also morphed into a portable Echo device. On their part, Google has the original Home followed by the Home Mini and Max.

The second war front is the apps that respond to voice commands. Google calls them actions while Amazon calls them skills. 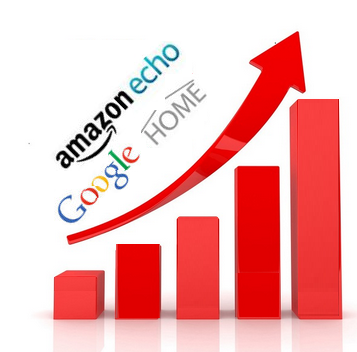 The apps provide access to entertainment, music or information through the speaker or give the user voice control over smart home devices like thermostats and televisions.

Both these intelligent speakers have thousands of apps with more getting added all the time.

What the HomePod’s manufacturers failed to understand is this war between these two smart speakers is an indication about competition in the smart speaker space.

The fight between Amazon and Google is being waged with a variety of hardware devices and apps as well.

It shows that the competition is not about the basic Echo or Home smart speakers.

It is about the AI in the speakers. It’s not about the smart speakers being just a speaker but an assistant as well.

The question here is what does the HomePod bring to the smart speaker war that is already waged?

The HomePod is built to compete in the smart speaker space,and that’s of little interest to Google and Amazon.

The marketing aspect of the HomePod is how good it sounds or its sound quality in general.

The device is being sold as a hardware device while the Home and Echo devices are sold as individual gateways to an AI system.

Looking at this from a different perspective, the HomePod is being sold as a speaker while the Echo and Home devices are sold as smart speakers.

One reason for this is that the HomePod is that the only AI it has is Siri and Siri isn’t so smart.

Siri isn’t brilliant on the iPhone as an AI,and on the HomePod, it’s worse.

The lure of having a smart speaker is in what it can do for you as compared to the others,and here, the HomePod is nothing more than a speaker.

If you want some information from your iPhone, it can retrieve the information but can’t pass it over and it also can’t send emails or make phone calls.

It can’t recognize distinct choices and can’t interact with your calendar.

Google’s assistant and Amazon’s Alexa are some of the smartest AI systems,and they can do all these things and many others.

This shows how limited the HomePod is as compared to Google Home and Amazon Echo speakers.

Siri doesn’t know very much as portrayed by Loup Ventures when they tested it, Alexa and Assistant on a set of 782 questions.

Siri answered 52.3% of them correctly and went ahead to ask Google for the answer half the times.

The Assistant got 81% correct and Alexa got 64% showing the versatility of these AI systems.