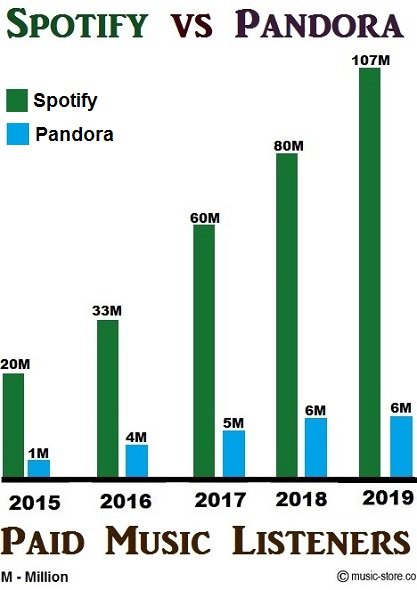 Spotify and Pandora are two different music streaming services where music lovers can stream their favorite tracks and even download them for offline listening.

While Spotify is a streaming giant with more than 130 million paid subscribers, Pandora is going through a tough phase, trying to survive each and every day.

While both of them offer similar services, Pandora is more focused on quality than quantity.

Means, if you are music producer or a band, you can easily upload a remix on Spotify but will find the same, simple uploading and publishing procedure extremely challenging on Pandora.

Spotify allows it’s users to search for songs by artist name, song name or playlist, whereas Pandora is more about discovering new songs.

After finding your song on Spotify, you can stream it, add it to your playlist to listen later or even better, share it with friends.

Spotify makes streaming very similar to a personal music library rather than a radio station.

With over 50 million songs, users can create playlists based on their searches.

It aims to replace traditional music players such as Windows Media Player and iTunes with ‘streamable’ music. 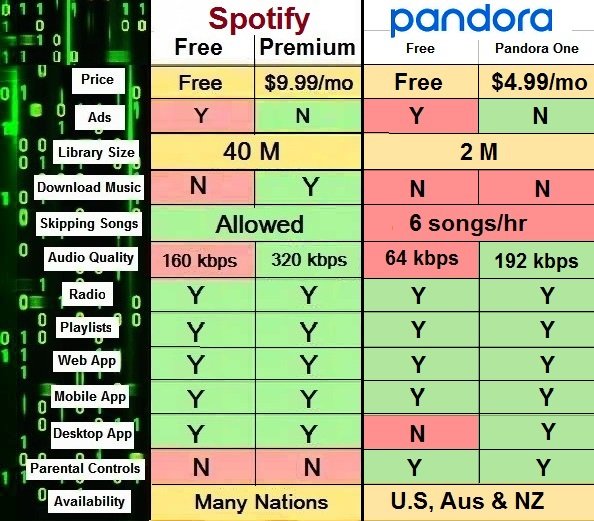 What sets Spotify apart from Pandora is the way it allows users to listen to whatever they want, anytime and anywhere they want.

Spotify offers radio-like features just as Pandora, but it’s main selling point is that you can stream top 40 hottest songs and listen to your favorite album from start to finish.

Users can search and stream particular songs as per their choice.

You get to choose the specific songs you want to listen to.

Spotify also has a good partnership with artists and record labels.

This partnership allows users to stream songs every time the song is played.

Playlist on Spotify works the same way it works on traditional music players.

To create a playlist you manually add and remove songs from your playlist.

The only difference between traditional media and Spotify’s playlist is that Spotify can be shared easily.

This has made Spotify popular among music lovers, who are looking for a free and a legal way to share their favorite songs and artist with friends and family.

Spotify offers users free, unlimited access, but keeps playing these annoying ads every 5 or 6 songs or every other time you use the Skip option.

Upgrading to the Premium version, will not only enable ad-free listening but higher audio quality and free access to Spotify Originals.

Upgrading to Spotify Premium option give users the benefits of downloading music and listening offline with having to stream online.

In an effort to get more subscribers, Spotify offers discounts for students as well as free one to three-month trials of Spotify Premium.

The main strength of Pandora lies in discovering new genres of music.

The number of station combination is limited, but the channel refining tools are highly advanced.

Compared to Spotify database of 50 million songs, Pandora doesn’t come anywhere near Spotify as it only holds a million songs.

There are some songs that you can find in Pandora but have been withheld from Spotify by artists because of compensation issues.

Artist like The Black Keys and Taylor Swift have withheld their music with Spotify but you can still find their music on Pandora.

Many people love Pandora because they can use it to discover new music.

Pandora constantly introduces people to new music where they can select their playlist based on songs, genre and multiple artists.

As users go through each song, they are able to offer a thump up or down, which allows them to shape the station to their taste.

Different from Spotify, Pandora offer users free services where they can stream music on their home-listening devices, mobiles phone and tablets.

This type of services includes ads and limits a number of time users can skip music.

If that is not a good plan for you, Pandora offers you the option of paid subscription on their Pandora one platform.

The benefits of subscription include, removal of all ads and allow users to listen to what they love.

While Spotify is flexible than Pandora, it is also more universal on the web than Pandora.

Spotify can be found in many mobile devices and media player, but rarely on HDTVs.

You can use Spotify connects to join Spotify with a set of speakers or other devices, which can then be controlled via a Spotify mobile app.

Pandora is found a lot more on frequently on mobile devices and computers.

It can be found on media players and HDTVs that carry default support for Pandora. 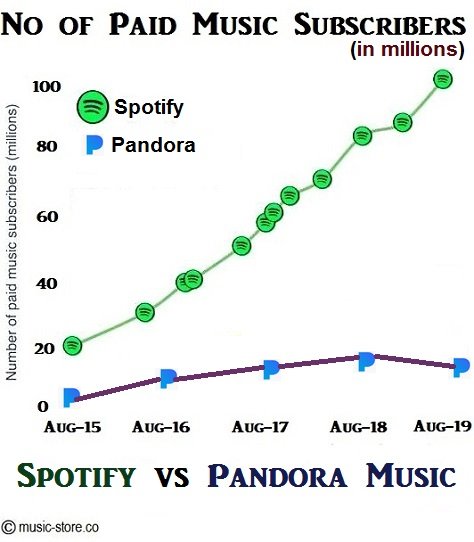 Comparing Spotify with Pandora, is like comparing David with Goliath.

Spotify, the giant with 100 million plus paid listeners and Pandora, the David with less than 6 million subscribers.

But the sad part is, Pandora was established (in 2001) 8 years before Spotify set foot on USA.

Well, if that’s the case things should have been the other way around.

What has Pandora done wrong, to deserve this kind of a destiny?

In 2015, Pandora had around 1 million paid listeners and Spotify had 20 million, thanks to YouTube.

But in 2019, Spotify has more than 107 million paid listeners, while Pandora has 6 million, a difference of more than 100 million subscribers.

The gap is expected to grow even wider, as Spotify is projected to reach 200 million paid listeners by 2024.

2020 is going to be a crucial year for Pandora’s survival. Every Quarterly and Half Yearly result will be seen as an another nail in the coffin or a jet pack boost for Pandora’s investors.