Why would a company stick to a loss making venture for years together?

There could only be two possible reasons…

1, They are patiently waiting for the winds of change.

2, They are trying to avoid tax implications.

While we all know about Google’s frequent brush offs with the IRS and the tax authorities of EU over the years, it has not one but multiple loss making ventures, including Google Glass, Nexus smartphones, Google Reader and Google Talk, to name a few.

In spite of loosing hundreds of millions of dollars on these business verticals, Alphabet had kept them afloat for years together.

We may never know the factual reason behind Google’s plan of action on loss making ventures, but we sure do know, that one of these entities, Google Play Music is going to be shutdown before 2022 dawns on us.

Will Google Pay be met with the same fate as Google Play Music?

Certainly not! while G Pay is a loss making entity in the US, it is the lifeline of Asian economies such as India and Singapore, which has a huge number of migrant work force.

Not only is it growing at an incredible pace in South East Asia and Australia, it is forecasted to cross 100 million global users by the end of 2021. 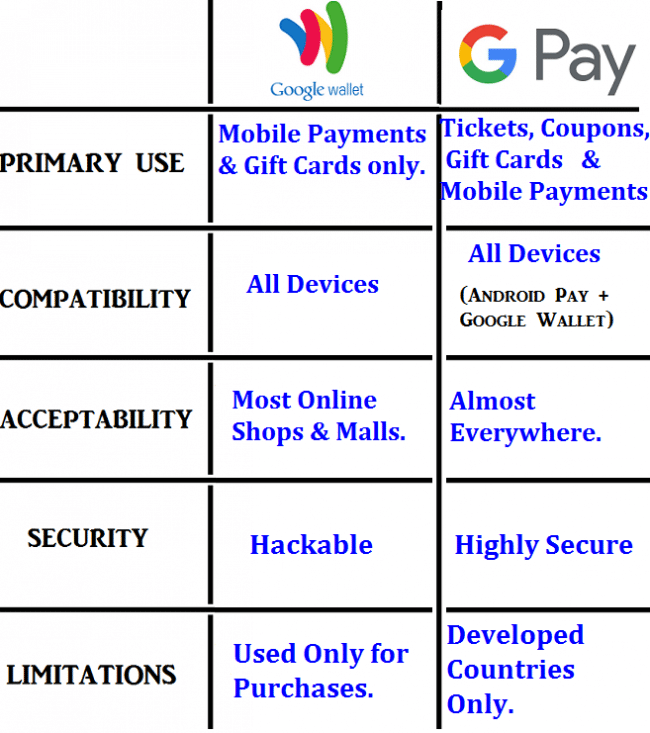 Launched in 2011 as Google Wallet, a means of transferring money among friends, Google Pay was nothing more than a mobile version of Paypal, it did in fact poach two of Paypal’s senior tech experts, for which Paypal is suing them.

While lawsuits and settlements are nothing new to Google, it’s biggest rivals are on the cyberspace and not in the real world.

Launched in 2014, Apple Pay became an over night sensation along with the iPhone.

Not only was it an instant hit among the smartphone users, iPhone’s Apple Pay garnered 10 million users within a year of it’s inception.

To be honest, Google Wallet was no match for Apple Pay.

While you can store credit and debit cards digitally on a Google Wallet, every time you add money from your bank account, Google charged a hefty commission, besides you can never make in-store purchases with G Wallet.

Then came Android Pay in 2015, Google’s perfect response to Apple Pay as well as Samsung Pay.

Least promoted by Samsung, Americans soon figured out that they can use their Galaxy Note 5, 10, S6 or S7 at any outlet in the country, irrespective of the swiping machine or card terminal they use.

Samsung’s master stroke left Alphabet with no choice, but to upgrade (or rename) their newly launched mobile vault Android Pay, to something that is more relevant to their brand name, Google Pay.

6 years after the launch of Google Wallet, G Pay was released in August 2018.

1, You can store your money in Google Wallet’s online vault, but you cannot do the same on G Pay.

2, Every time Wallet takes money from your credit, debit or bank account, it charges a 2.9% transaction fee.But no such transaction charges with Google Pay.

3, You cannot make in-store purchases with Google Wallet, but the same can be done with G Pay by keeping your mobile close to the card terminal or by just tapping it.

4, Google Wallet and Android Pay apps were only available in the US, whereas Google Pay app is available in more than 28 countries.

5, Wallet does not reward you for your online purchases, whereas G Pay offers steep discounts, cashbacks, scratch cards, lucky draws, deals and coupons for most online and offline transactions.

8, Google Wallet was never approved as a payment method for Play Store, but in 2019, Google Pay has been officially included, in the list of payment methods, by Alphabet’s Play Store.

9, Google Wallet had no offline presence, but Google Pay is accepted online, offline, on smartwatches and sometimes even without a web connectivity.

10, Google Pay thrives only in those countries with centralized banking system, Wallet on the other hand, is totally digitized and works on any browser, wherever there is a net connection.

As we all know Google Wallet is a non entity anywhere outside US or UK, but Google Pay has totally turned the tables upside down, especially in South East Asia, where it hardly had any presence prior to 2018.

Growing at a phenomenal rate in India, it is expected that by the end of 2022, more than 50% of all mobile payments will be made through G Pay.

One of the main reasons for G Pays extraordinary success in India, is that country’s below par infrastructure.

With more than 60% of it’s population below the poverty line, India does not only need more hospitals or schools, but also a great deal of ATM machines.

While it still has 238,000 ATM machines, it can hardly service a country of 1.4 billion people, besides most of these ATMs are located in metros, tier 1 or tier 2 cities, leaving the rural India in a hapless situation.

Since the Indian government regulates the banking sector, Google Pay was presented with an ideal playground, a fairy-tale like scenario.

Using UPI (Unified Payments Interface) and P2P (Peer to Peer) payment systems, people were able to send and receive money in an instant, just like their American counterparts using Venmo, PopMoney or Zelle.

Google Pay follows the same security protocol in India like it does in every other country.

For every transaction a virtual bank account is created to deceive possible hackers and your details are scrambled at every step of the transaction.

To make sure, that even if the hackers do manage to succeed, they would get a bunch of meaningless data files, instead of your decrypted personal details.

With more than 90 million global customers, Google Pay is also the fourth largest payment gateway in Australia, where card terminals based on NFC (Near Field Communication) is as ubiquitous as in Europe.

It’s just that the American shop keepers prefer the age old credit card swiping machines and terminals, which is not only cost effective when compared to modern day contactless terminals or wave gadgets.

But also, majority of American consumers prefer credit card purchases, to avail themselves, the much coveted loyalty and reward points from the card issuing banks.