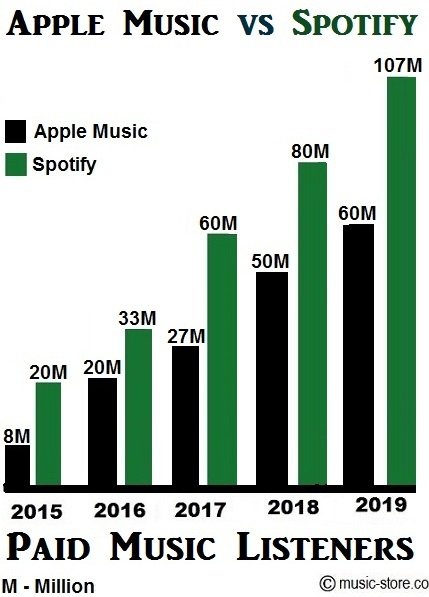 People are spoilt for choice when it comes to choosing between Apple Music and Spotify.

Even though the services and features they offer are very much similar, the navigation of their apps as well as the value added features such as lyrics, song and artist info vary differently.

Other features, include..How many devices you can sync to? the maximum audio quality? how good the recommendation are ? how much each service cost ? and so on…

The truth is, they all offer similar services, but not the same services.

Some features in Spotify are better, whereas others work best with Apple Music.

Which is why we want to compare between Apple Music and Spotify, to figure out which streaming music services deserves your monthly subscription.

It has been almost 5 years since Apple Music was launched and so far it is touting how amazing it is to use.

With massive marketing campaigns and several celebrities lined up, they are confident about the streaming services and people are willing to subscribe to monthly or family plans.

Currently, Spotify is leading the space in terms of paid subscribers.

However, Spotify has been facing issues.

It is getting criticized for not paying artist enough money, with artists like Taylor Swift withdrawing her songs from Spotify and others soon following suit.

Spotify has a huge amount of music that subscriber can listen to and other amazing features. 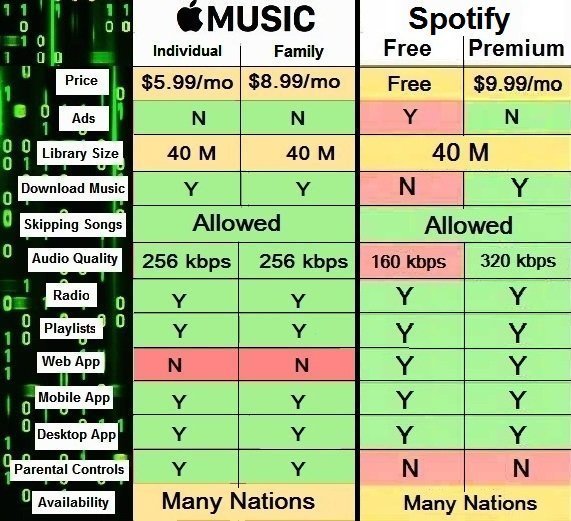 What is the price difference of both streaming services?

Only 6 subscribers are allowed to use the family plan for both Spotify and Apple Music streaming services.

Which has more music?

Both services claim to offer over 50 million songs on their platforms, but depending on where you live, access to songs sometimes differs.

For instance, US and UK subscribers get different streaming services than a user in Sweden.

The services they offer are pretty much equal in terms where they can be accessed.

What do they feature?

Apple Music offers a wide selection of radio stations that play music according to the genre, albums, artists and much more.

Playlists at Apple Music are curated depending on a particular artist, style or activity like driving and exercising are curated by experts.

Spotify has a different playlist compared to Apple Music.

It has a playlist-discover feature called Discover Weekly. The curated playlists have 32 base genres to choose from and are updated every Monday.

Based on your listening habits, Spotify offers a two-hour of personal music recommendations based on your preferences.

Apple Music supports airplay and allow users to send songs from iPad or iPhone to a television or a stereo.

You can create your playlist from the songs available or choose a curated playlist to listen to on both streaming services.

Do they have adverts?

After a three-month trial, Apple Music requires subscribers to pay a monthly fee of $9.99 per account and $14.99 for a family plan.

After paying, both options on both streaming services do not make users listen to adverts.

Different from Apple Music, Spotify has a free tier option that is ad supported.

However, once you upgrade to their premium option, you will not listen to any ads.It’s a non-ad-supported tier.

If you want to tell the difference between the sound qualities, use audiophiles.

It’s the best way you will be able to tell the difference, but Spotify still offers better sound quality than Apple Music.

Where are they available?

Apple music is available in more than 113 countries on iPod, iPad, and the iPhone as well as Apple Watch 1.0.1 or later.

Apple Music is available a variety of devices such as Macs and PCs running iTunes, Apple TV and on Android.

Spotify is available on devices such as Android devices, the web, iOS, Fire TV device Amazon Echo and several connect speaker systems. It is available in more than 60 countries.

If you are going to choose one of the streaming services to subscribe to, both services are relatively easy to use, fairly priced and widely available.

They both come with plenty of options for creating playlists and finding songs and both have basic controls.

Depending on your preferences you can choose either of the services. 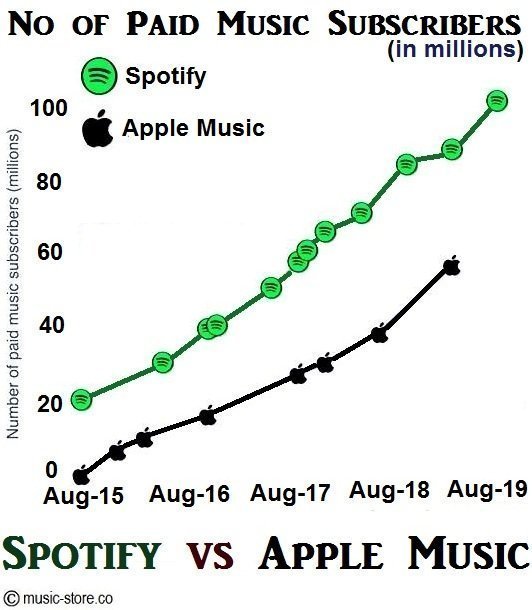 Battle of the heavy weights, two of the biggest music streaming portals in the world.

One owned by the biggest company in the world in-terms of turnover.

And the other had already crossed 100 million paid music subscribers in 2019.

Apple Music and Spotify are not only here to grab your subscriptions but to take your music streaming experience to a whole new level.

Spotify has already tied up with Google, to use it’s Search Engine features, to embed songs from Spotify in it’s search results where ever possible.

Apple Music has harnessed the power of iPhones, right from it’s initial version , to include free versions of Apple Music apps, in every iPhone released to date.

In 2015 Apple Music had 8 million paid listeners, while Spotify had already crossed 20 million.

2017 was absolutely fantastic for Spotify, as it grew at 63%, reaching 60 million premium subscribers.

2018, was productive for both the streaming giants, as Spotify reached 80 million paid listeners and Apple Music crossed 50 million.

2019 was a landmark year for the online music streaming industry as Spotify crossed the magical 100 million paid subscriber mark and Apple Music had well over 60 million premium listeners.