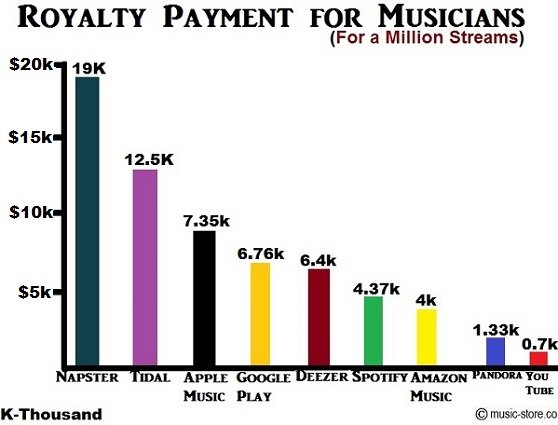 As of June 2020, Napster pays indie artists more than half of other streaming services combined together.

It is hard to believe that a company that offered illegal downloads in the late 90s, would end up paying the highest percentage of royalties to musicians.

It is also quite puzzling to learn that streaming giants like Spotify, Google and Amazon pay a meager 40% of what Napster pays indie artists.

So, for a million streams Napster would pay $19000, the only other streaming portal that comes close to what Napster pays musicians is Tidal.

Tidal pays $12500 for a million streams, which is very good considering the current state of affairs inside the Tidal Inc.

Apple Music comes third with $7350, Apple has been a lot more generous in the recent past, ever since Taylor Swift wrote an open letter to the CEO of Apple Inc.Tim Cook regarding royalties and free trials.

Google Play Music pays $6760 (per million streams), $800 less than what Apple Music pays, but unlike it’s peers Spotify and Apple,  Google has managed to stay away from controversy (so far).

Deezer is another company that is going through a tough phase, but still they pay $6400 per million streams, $2000 more than what Spotify pay their artists.

It’s really a shame that the biggest music streaming platform in the world,Spotify pays one of the lowest payout to the artists.

One cannot really comprehend, why Spotify does this, when struggling streaming portals such as Napster or Deezer , who have less than 6 million subscribers pay quite a handful to the artists.

Spotify’s numbers are anything but shocking, they pay a dismal $4370 (per million streams) , no wonder Taylor Swift had her entire catalogue removed from Spotify for three long years.

Amazon Music occupies the third place from the end with $4000 per million streams, Pandora makes up the penultimate spot with $1330.

And finally for all it’s billions of visitors everyday, YouTube pays an absolutely dismal $690 per million streams.

Since digital streaming services hit that airwaves, it has changed the music industry completely.

Many people have subscribed to the music streaming services on different platforms include Spotify, Sound Cloud, Apple Music, Google Play Music, Pandora, Tidal and a dozen other platforms.

How Do These Companies Pay Artists Their Royalties?

In the old days, it was easy for an artist to figure out the payments from vinyl, CDs and iTunes downloads.

But music streaming services makes it almost impossible for artists to know and calculate their royalties.

The main reason why artist fails to know the exact royalty rates is because many streaming companies refuse to disclose the process they use to pay artists.

They fail to break down their per-stream pay and have burned artist from sharing royalty statement.

Although this happens, still here is a simply of royalty rates gauge on different streaming services.

Tidal is considered one of the best streaming services that pay music’s more royalties for their music. The services dole out 1.2 cents.

That doesn’t sound different from the competitors, but a signed artist only needs 180,000 streams on Tidal to make a monthly minimum wage.

Independent musicians earn the most according to average rates.

Independent artist gets about $5.99 for every $9.99 download through iTunes.

But they also make more per stream on the streaming services.

There are many reasons why Tidal is better than other services.

One of them being that Tidal is a company owned by a musician, Jay-Z puts artists above other things, including royalty payments.

The company pays 75% to royalties owners and keep 25% to themselves according to Jay-Z himself. 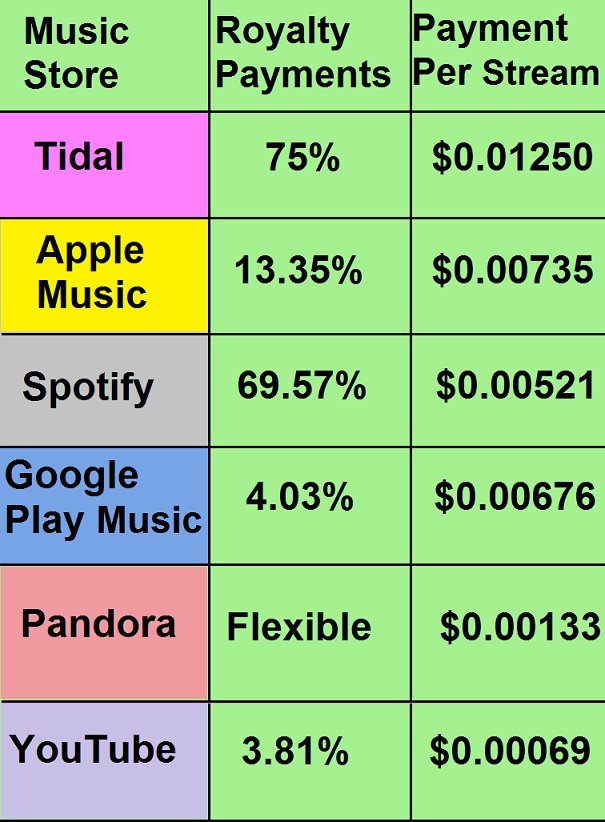 Although Apple Music is considered the best streaming services that pay artists royalties, it won’t be breaking the banks to pay artists.

In this regard, Apple Music has lofty ambitions.

Although the company had controversies about their payment plans earlier on, the controversy is now behind them thanks to Taylor Swift.

According to the Trichordist, an artist rights blog, Apple paid out an average on $0.00735 per stream in 2016.

Because of the streaming rates, Apple music is considered the sweet spot since it provides 13.35% of all streaming revenue corrected.

Because of the low royalty rate, Spotify has been facing criticism from artist and even other musicians pulling out of their contracts with Spotify.

However, the low royalty rates might be attractive to investors awaiting the music service’s IPO though to take place this year.

Many artists and records labels want Spotify to increase it royalty rates closer to it’s competitors and rivals.

If Spotify agree to the deal, other services will have to increase royalties too. 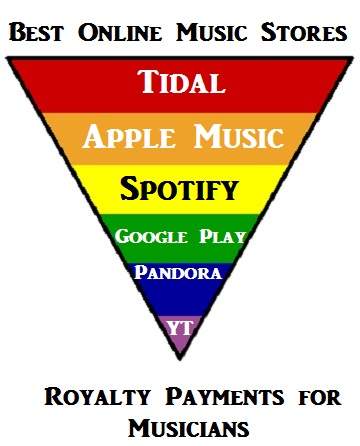 Google Play Music offer artist an average of $0.00676 per stream and has generated over 4.3 percent of measured revenue up from 2.36% of streams the previous year.

Pandora has raised their royalty rates since the inclusion of their premium services.

Now Pandora gives a broad roll out for people who have been wondering how Pandora pay their artist and record labels.

Pandora’s short version make sure all parties get paid regardless of the type of license or the tier.

Pandora is the most secretive streaming services when it comes to royalty rates and payment.

The royalty rates vary differently from license to license.

Though they pay different royalty rates to artists, YouTube is shown to be the most inefficient streaming revenue for individual artists.

With an extremely low average of $0.00069 per stream, the video streaming service still makes it to the list.

The YouTube Red subscription services appear in the list, but it is unclear if ads-supported videos are included in the royalties.

Who can forget the Korean K Pop singer PSY, who made more than $8 million from YouTube royalties alone …in the year 2012, for his record-breaking hit single “GANGNAM STYLE“.

For those who want to monetize their content, it can be largely lucrative or insubstantial depending on the traffic you generate.

The right owners to get a percentage of shared ad revenue, so really need to choose wisely.

Although music streaming services have been a darling for users, it cannot be said the same for artists and label records.

The individual deals that streaming services offered vary widely and that means the royalty rates vary too.

Now that there are many music streaming services, the war still continues among the services and artist to increase their royalty rates.

More and more independent artists are into the mainstream and they are collecting royalties from different music stores, Apple Music and Google play Music offering the best rates.